Pete Day of BSHG made an appearance on Andy Comforts's Drive Time Show in the Down that Road segment. He talks about the Tank Ramp the 2014 WWII Day and the website.

The Trent A Great British Story

Thanks to this website we were contacted by the BBC who were making a documentary about the river Trent. Documentary producer Stuart Woodman told us the documentary was about the history of navigation on the river and that a piece about our Tank Ramp would provide the perfect end to the series (being almost at the end of the river!)

Following preliminary discussions and a site visit by Stuart, a date of 15th March 2012 was set. Soon after we were sent an email requesting that members of the group attend and if possible could we get any WWII vehiclesto attend or interesting people to interview. We said. No problem and set about gathering the troops.

Soon the day arrived and 15 or so BSHG members, three WWII jeeps and Tank Ramp veteran David Gibb assembled at the picnic place for the shoot. Filming began straight away with various takes of the Jeeps making their way down to the Ramp whilst group members and film crew made their way on foot. Veteran David was given a ride in Jeep number two as at 2 days short of his 90th birthday we felt negotiating the steep hillside path was probably not for him. 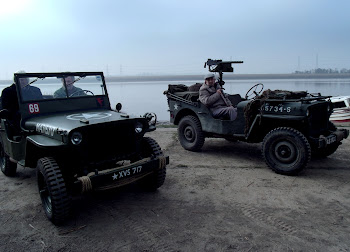 Once at the ramp the Jeeps lined up along the concrete whilst presenter Tom Cunliffe firstly interviewed group chairman Craig Allison for a brief history of the ramp and the whys and wherefores of what the Ramp meant to the village today. Tom then interviewed David to gain an insight into what life was like on the Tank Ramp during WWII.

The accompanying photographs are of our shoot. The documentary was shown on BBC 1 on the 12th of June 2012.

Various articles about the Tank Ramp and BSHG in the press.